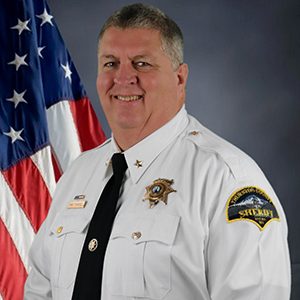 Commissioner Dave Pearsall was appointed as a fire commissioner in January of 2013. He was raised in Thurston County. Commissioner Pearsall graduated from Fort Steilacoom Community College and attended St. Martin’s University.

Commissioner Pearsall has worked for the Thurston County Sheriff’s Office since 1986. He has  worked his way through the ranks of the Sheriff’s Office to his current position as the Chief of the Support Service Bureau. He currently oversees Information Technology, the Investigative Services Division comprised of the Detective, Records, and Evidence Sections and the Services Division comprised of the Front Desk, Civil, Warrants, and Firearms Sections. In addition, he oversees the Sheriff’s Office fleet, and Honor Guard Unit.

Dave is a graduate of the FBI National Academy. He is also a board member and past president of the Oregon-Washington Lawmen’s Association (OWLA), an organization dedicated to enhancing the professionalism of men and women in law enforcement. Commissioner Pearsall is a member of the Griffin Neighborhood Association. He enjoys spending time with his wife Deana and their family, as well as photography.